Paul Ryan Gets His Chance 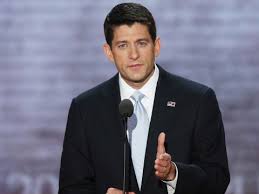 When he was running for Vice President back in 2012, Rep. Paul Ryan (R-Wis) became the effectual budget guru of the House of Representatives. With the budget deadline coming up in the new year, he could finally get the chance to prove himself that he has been waiting so long for. This could prove as to be a very tricky venture for Ryan, however.
The GOP won’t let congress raise taxes (thankfully), and the democrats won’t cut their precious welfare spending, so Paul Ryan could very well have a mess on his hands. If the deal is too conservative, then he will loose his reputation for bipartisanship, but if the deal is to liberal, he will loose his tea party support, and tea party support is very important for any republican at a national level in today’s political climate. On the flip side, if Ryan is successful, he could vault ahead in the world of 2016 prospects.
The deal that I propose would loosen cuts on defense spending and allow a separate vote to decide whether or not to loosen cuts on social spending, and by how much they should be cut. We could raise revenue without raising taxes by eliminating useless money-sucking agencies such as the Administration on Aging, the Voice of America, and the Department of Rural Electrification.